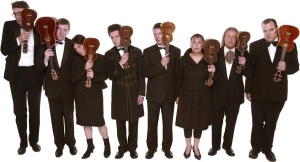 So, last night I went to see the Ukulele Orchestra of Great Britain at the Opera House. Oh yes I did. My friend Jane bought tickets and invited me to go along and it sounded just weird enough to be my cup of tea, so away we went. Before the show, we were at Opera Bar and noticed lots of people (ok, by ‘lots’, I clearly don’t mean thousands, let’s say at least 37) carrying little ukelele-shaped cases. At first, I was surprised that the orchestra members would be out drinking so close to showtime, then realised that these must actually just be random people carrying ukuleles. The ukulele carriers covered some pretty broad demographics – men and women, young and old, two eyes and four eyes. I know it sounds dumb, but I had never really thought of ukuleles as instruments before last night. More of a cute-looking joke present to give a niece or a friend who secretly wanted to be Slash, but lacked any musical ability.

Anyways, we got to the concert hall and it appeared that the gig was sold out, or pretty close to it. On our right was a fancy looking pair of seniors, who told us that they had brought their daughter and their grandson (with his ukulele). And their Indian parish priest from Maroubra (with his ukulele), who seemingly loves music and turns every church service into a singalong. On several occasions of audience participation, said priest thrust his ukulele high in the air, like some sort of salute to the gods. Rock on, Father. On our left was another fancy looking pair of not-quite-as-seniors from the north shore. Jan was learning the ukulele after completing some classes for beginners at an evening college and had recently enjoyed a ukulele jam session with a group in Sydney’s inner west. Even my friend Jane advised that she had taken ukulele lessons. I like to think I’m pretty down with current trends and I definitely love music, so I feel like I have missed something here. WHEN DID THE UKULELE GET SO POPULAR? AND WHY DID NO ONE TELL ME?

Whatever, the concert was fun, with everything from Beethoven to Lady Gaga to a Playschool-esque singalong version of the Sex Pistols’ Anarchy in the UK. The highlights for me were the emotional rendition of Wheatus’ Teenage Dirtbag and the upbeat, jazzy take on Kate Bush’s Wuthering Heights. As we left, I was happy, but still not sure what to make of this new (to me, at least) ukulele world. However, I am nothing if not easily inspired, so thought I’d get home and google ukulele instructors in my neighbourhood and start taking classes. Then I ran into a group of youngish ukulele carriers near the taxis and my immediate reaction was: WEIRDOS. And that was the end of that.

PS, if you want to visit ukulele world without paying for a ticket, you can check out the Orchestra on You Tube.