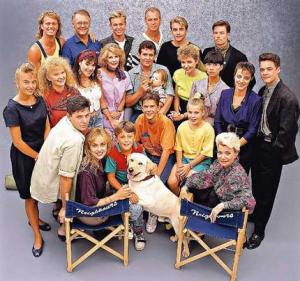 So, a confession.  I love Neighbours. (The show, not the 90+ year old couple that live next door to me.) I know it’s not cool, especially not for kids now in their 30s. But there’s something about it that’s addictive, like a can of sour cream & onion Pringles. Maybe it’s because our mum wouldn’t let us watch it 20+ years ago when it started – in a case of bad timing (as it used to be a pretty wholesome show), she came into the room when the characters were at a disco and some kids were doing drugs while taking a break from dancing to Locomotion. And that was the end of that. But I’m allowed to watch it now and it’s come a loooong way from the innocent hijinx of Ramsay Street of old. No more do people just ‘move to Queensland’ to exit the show – now there are teenage mums getting run over by cars; streetfuls of divorces; high flying jobs in New York; family reunions in Italy; and recently someone did actually go to Queensland, but only for a holiday in Port Douglas. The artistic quality of the camera work is, like, waaaay cinematic now, with strange angles aplenty, random shots of buildings and scenery, split screens and even a magic phone feature: a little pop up to show you the creepy text message the teacher just received or the jilted lover’s call being ignored. Heavy stuff. Add to that the teachers having affairs with students; old people faking injuries to scam insurance claims; a gay teenage mechanic; high schoolers cheating on final exams; a pirate radio station (as in underground, not arrr arrr me hearties).  And then there are high schoolers organising raves & selling drugs. Hang on a minute, that rings a bell. The haircuts and fashion might be better, but methinks they’re recycling ideas from the early days…like that old crank Paul Robinson, who has been on the show since 1985. Crikey.