I’m not really a big fan of serious new year’s resolutions. I have a few things that I tried last year that met with mixed success (see more movies, read more books, run more, lose weight, say yes to more things – in a good way – and so on). Then again, I look back on 2012 as a great year for me, as things came up along the way that I turned into on-the-spot resolutions and saw those through. If I was wedded to my 2012 resolutions, I would have felt like a failure because my September injury meant a fast and dramatic end to my running program; I would have forced myself to see movies that I didn’t like to fill the monthly quota I had set; I would have said no to doing things so that I could finish the books on my bedside table. Granted, that growing pile of books is now threatening to topple on my head in the dead of night, so reading more books is something I’m keen to do in 2013 – if only for survival.

My resolutions have tended to form more of a to-do list for the year ahead, which I don’t think is best practice resolution setting, but it seems to work for me (mostly). I try to make some small, everyday kinda commitments or goals and some bigger (or longer term) resolutions too. And like any good to-do list, the more I put on, the better the chance of crossing something off. Surely.

Anyways, a resolution that I’ve decided to try this year is a very shallow and simple, yet specific, one: wear more nail polish. Because I’m worth it. Really though, I never paint my finger nails as I’ve never seen the point of it when they chip so quickly when you’re busy doing stuff, but this year I’m starting in style. With the yellow, pineapple scented (yes, really) Sportsgirl nail polish that I gave my nieces for Christmas. Sure, I keep thinking I’ve got stickers caught on my fingers or someone has attacked me with highlighters, but these colourful nails are everyday sparks if ever I’ve seen them…

I’m not really a mani-pedi kinda gal. But sometimes I see people with perfectly groomed nails and I wish I could be so dedicated. And if I were so inclined, there are certainly many ways to bring some personality to the tips of your digits through polish or decals or, you know, metallic caviar beads.

Hail the Nails in the UK sells this bizarre look, which would appear equally at home sprinkled on top of cupcakes (though these ones aren’t edible). There are a few steps to the process – painting the nails, then coating the nails, then sprinkling on the beads. This ‘metallic caviar’ is interesting, but I think I’d prefer 100s and 1000s. Maybe there’s a market for a new look: Fairy Bread Fingers. Maybe…

Or perhaps this poodle decal is more your scene.

The Fog Shoppe (and yes, I do always pronounce that “Shop-ee” in my head), feature a few different breeds, so you can wear your favourite. And in case you’re a fickle kinda person whose favourite breed changes regularly, I recommend a nail decal instead of a tattoo.

Then there are these fairly creepy black spider and spider web nails from Inspired Nails. I like to think that somewhere there’s a serious, conservative corporate type prepared to don these for a Board meeting, just to see the reaction. Or the coolest paediatrician in town could impress Spiderman fans with this set.

There’s also a huge collection of Hello Kitty nail decals, if they’re your thing. And lots of moustaches, which is a craze that I still don’t quite get. And chess pieces and sporting team logos and South Park characters and spots and stripes and checks. It’s like a whole other world of fashion out there – and they’re cheap and disposable, so you can change your mind daily.

You can check out Hail the Nails here, The Fog Shoppe here and Inspired Nails here. Or just google ‘nail decals’ and prepare to be amazed. And a little bit scared.

Being a pretty conservative sort of lass, I don’t have any tattoos. Although since tattoos seem to be so popular these days, it’s kinda like they’ve become the new normal – so, really, I’m a rebel for NOT having a tattoo. Yes, really. I’m not sure when tattoos made the shift to becoming more common, but now it’s getting tougher to find a cleanskin – you know, one that’s not featuring a Chinese character, inspirational word, Celtic symbol or Maori sleeve. Don’t get me wrong – I’m not against tattoos. The fact that I don’t have one is more to do with an aversion to pain and no clue about what I’d want to be branded with for life. I often admire them on others, yet sometimes, you see tattoos that definitely belong in the But, why? file…

According to the Geeky Tattoos website, these feet belong to Alicia, a lady who posted the image on Flickr and said that she chose to have good and evil cupcakes tattooed on her feet to remind her to stay young at heart and to symbolize the balance of good and evil within herself, but adds “and I have a thing for cupcakes”. Yes, so did I. 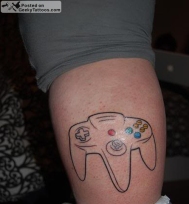 And from the same website, here is Ashley’s leg. With a tattoo of a Nintendo 64 gaming controller. I am not a gamer, so I can’t really understand this one either. Maybe this controller is more than just a piece of plastic with coloured buttons that you press to make a character on a tv screen jump or run or whatever?

We all know it’s important to get plenty of vitamins from fresh fruit and vegetables. But I’m not sure about this tattoo of a bunch of asparagus – I don’t think those vitamins count. Though it’s certainly more interesting than a bunch of roses or daffodils.

Continuing on the food theme, here’s a hot breakfast. On someone’s arm. I love breakfast as much as anyone, but I’m not sure why you would want a picture of it on your arm. Unless that bacon made a smile under those eggy eyes. Then I would understand.

Anyways, if you would like to see more, the first two pics are from Geeky Tattoos and the foodie tattoos are from OC Weekly. And, of course, EverydaySparks takes no responsibility for any action you may take as a result of this inspirational post… What would you get?

They say that our sense of smell is a powerful thing. That one whiff of something can take us back to a place in our memory – good or bad – and make us feel as though we are there again, living it. But if that’s all too deep and meaningful for you, then I’m sure you will at least agree that nice smells are good.

If you like nice smells, you’ll like this collection from the Long Winter Soap Co. Amanda sells her collection of lip balms and perfume oils on etsy. And they’re not your usual run-of-the-mill fragrances – I’d call these perfumes with personality. They’re a little bit different. Like Beach Day, which Amanda says is “a crazy delicious blend of sea breezes (the clean, blue-green kind, not the fishy kind) and sweet buttery coconut.”

And there’s Sunset. For Amanda, that “comes after a hot late summer day, and is accompanied by the cooling of baked earth, the frantic buzz of bees collecting newly released nectar before nightfall, the dampness of moisture settling on soil, and that cup of chai I instinctively reach for. In scent terms, a blend of hay, white musk, beeswax, patchouli, and spiced chai.” Is it just me, or are Amanda’s product descriptions like poetry?

But in case it is just me and you’re not into this at all – here’s what first caught my eye: Unicorn Farts lip gloss. Yes, that’s right – “smells just exactly like real imaginary unicorn farts! Which smell like spearmint and pink cotton candy, everybody knows that.”

One more for the road – just because it sounds too lovely to leave out: the Blue Skies hand and body cream. Blue skies? “The result is super fresh, like running under a clothesline on a sunny day.” Love your work, Amanda of Long Winter Farm!

For all these beauties and more, you can check out Amanda’s fabulous etsy shop here.