There is a section of the New York Times called ‘Kids Draw The News’, which pretty much does what it says on the tin – kids from around the USA (and sometimes even other countries) are invited to submit a drawing to tell the story of a particular news topic. As is often the case with pictures drawn by kids, there are some very funny and very clever and very wacky results. Here are some examples of what I’m talking about…

An excerpt from an article last month: Swarms of honeybees seem to be everywhere in New York City these days — on cars, on trees, outside restaurants — as fast-growing colonies take off in search of new homes. As illustrated by the kids who made a big effort:

As illustrated by the kid who was maybe being forced to enter by an eager Mom and Dad:

Also from last month, an article about NYC Mayor Bloomberg’s plan to limit the availability of giant serves of soda: Because way too many New Yorkers of all ages are overweight, Mayor Michael R. Bloomberg wants to make it illegal to sell large sugary drinks in restaurants, movie theaters, delis and some other places.  From the pens and pencils of babes: 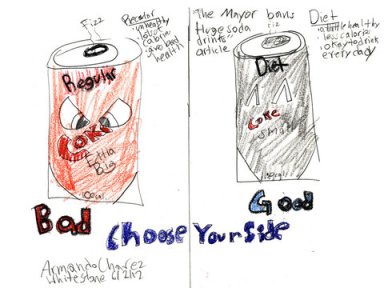 And from a kid whose parents maybe need to cut him off from tv shows like NCIS and Law & Order:

As an HR person, I can’t help but think that ad agencies should consider signing up some of these kids sooner rather than later. And I am now imagining a newspaper with kids’ drawings to accompany the stories, rather than shocking photos. Or maybe even using kids’ drawings instead of some of the news stories. Somehow, they get to the point and make you smile at the same time – would love to get their take on issues in politics and the environment. Oh, and the real story behind the breakup of Tom Cruise and Katie Holmes, of course.

You can check out the ‘Kids Draw The News’ section of the New York Times online here.

4 thoughts on “Kids Draw The News”