I work with a very nice German lass called Kristina. One day, we were in the kitchen talking about McDonald’s (as you do) and Kristina was raving about how much better McDonald’s is in Germany. I noted the existence of something called the ‘McOz’ burger (I think it’s the addition of beetroot that the marketers think makes it an authentic Australian burger) and expected Kristina to admit defeat. But, nein – Kristina laughed heartily and began to tell me all about German McDonald’s, a magical place where you can drink beer with your meal (presumably not with Happy Meals)… 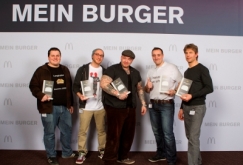 German McDonald’s recently held a competition for the general public to name some new burgers on the menu. The winner was the new McPanther burger, on a cheese & onion bread roll, with mozzarella, beef, bacon & smokey tomato sauce. No panther, it turns out, just traditional beef. Laws for deceptive & misleading advertising mustn’t be quite as tight in ol’ Deutschland.

Then there is the fantastically named Crockstahzumjot. Kristina said there was no translation for this word, which is fine by me. But then I googled it – turns out that before it was a rockin’ burger, Crockstahzumjot was a rockin’ band. Their 2012 tour is called Hip Teens Wear Tight Jeans. Uh huh. The burger itself is pretty fancy – crispy chicken and bacon on ciabatta bread. Ciabatta bread, if you don’t mind! According to the website, this burger will be available later this month, from what I can gather with my limited German skills.

Then there is another great name – the Lauginator. Sounds like the Terminator only tastier, with cured ham and Italian grana pardano cheese. The bun, you ask? Why, it’s made of pretzel bread. That’s right, your burger is nestled onto a bun that is really A GIANT PRETZEL. Genius. Sadly, this came last in the public vote and its creator, Bastian K, will never see his dream become reality.

Then there is the McHaudegen, which came fourth in the public vote – sesame roll, three layers of beef, honey mustard sauce and bacon. I think it got lots of votes because the photo on the website shows its inventor, Sven G, standing behind the burger. And Sven is a big guy, covered in tattoos.

Then there is McOerms, which will also be available at the end of this month – it’s a spicy little number, featuring (according to my trusty translator Kristina), “jalapenos, chorizo, beef, curry chilli sauce, beef”. It seems there is no translation for ‘oerms’ either, but the combination of ingredients makes me think it is possibly either ‘yuck’ or ‘ouch’.

In addition to the wacky competition and the occasional theme-menu options (Mexican, Asian etc) that Kristina assures me are big deals, German McDonald’s has a McWrap with prawns, a McRib with marinated pork ribs and a Veggieburger on the standard menu. Crikey.