I am not entirely sure how I found out about the Weeki Wachee Springs State Park in Florida. But it is now on my bucket list. Would that be because it is, “one of the deepest, naturally formed underwater caverns in the U.S.”? Maybe for some people. Or because of its super catchy name, which means, “little spring” or “winding river”? Not really, to be honest. It’s actually because it is, “THE ONLY CITY OF LIVE MERMAIDS!” (or so they say on their website). 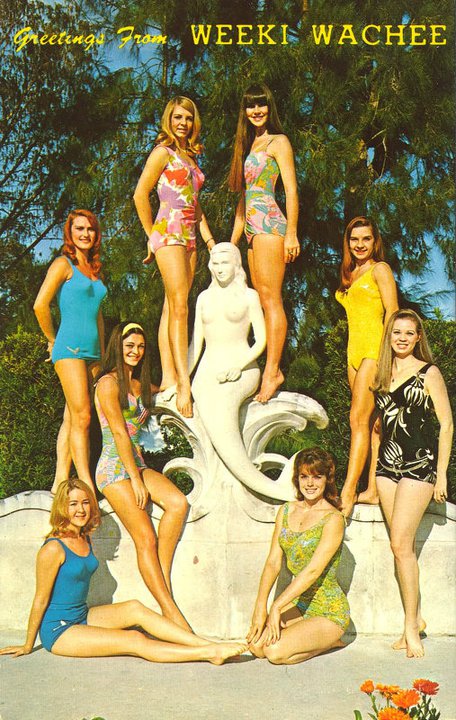 Apparently it all started back in 1946, with a former Navy guy called Newton Perry, who trained SEALs (the Navy ones, not the ones who do tricks and catch fish) to swim underwater in World War II. No notes on whether he was a mermaid/merman, but apparently he, “scouted out Weeki Wachee as a good site for a new business”. And then he invented a method for humans to breathe underwater via oxygen hoses connected to an air compressor (so it could look like humans were, “thriving twenty feet underwater with no breathing apparatus”. Genius.

Then he built an 18 seat theatre into limestone, six feet below the water’s surface. And then? Well, I can’t paraphrase, as I won’t do it justice: “Newt scouted out pretty girls and trained them to swim with air hoses and smile at the same time. He taught them to drink Grapette, a non-carbonated beverage, eat bananas underwater and do aquatic ballets.” AMAZING.

And so the mermaid show drew large crowds and was quite the place to visit in the 1950s (even Elvis stopped by). And then in the 1980s they opened a water theme park and beach. Then in the 1990s they started the popular “Mermaids of Yesteryear” shows. Apparently, the former mermaids’ motto is, “Once a mermaid, always a mermaid”.

Not convinced? Then have a look at some of these amazing mermaids from the “Mermaid Roster” on the site (which is almost too good to be true)…

I salute you, Newton Perry, for your fabulous vision. And you too, multi-talented mermaids. I very much hope to see the mermaid show for myself one day (they are open 365 days a year, fyi). [I did check out the ‘Careers’ section of the website – no current requirements for additional mermaids.] “Being a mermaid is a magical job. As the mermaids sing in The Little Mermaid show:

We’re not like other women,
We don’t have to clean an oven
And we never will grow old,
We’ve got the world by the tail!”

Sing it, sisters. [You can check out the website here.]