It’s the week leading up to Valentine’s Day and, whatever your status or your take on the whole festival, it’s a good chance to think about what we love. Whether that’s people, furry friends, places, foods, languages, brands, weather, hobbies, or even shoes. Or weird stuff, like those people on My Strange Addiction who love eating the synthetic filling in couches or love their car (as in, really love their car) or love their teddy bears as if they were children. (If you don’t believe me, you can check out the stories on the show’s website here.)

Anyways, this week I’ll be posting about some of the things that I love. Today, it’s the incomparable Humans of New York.

It’s more than a blog and a book and a community – I’d say that it’s a public service. When I first encountered it, I was hooked. With a snap and a few lines from someone out and about in NYC, you get an incredible insight into their life – sometimes sad, sometimes funny, sometimes hopeful, sometimes heartbreaking. For a fanatical people-watcher like me, it’s gold. Brandon Stanton is the man behind the Humans (well, technically he’s behind the camera in front of the Humans). What started as a ‘photographic census’ of NYC grew into a hugely popular blog and it’s now even bigger thanks to Facebook (the page has almost 3 million likes). There’s also a book of HONY photos and quotes that you can buy. These are just a selection of some of my recent favourites. If you are on Facebook, I strongly suggest that you get on board with Humans of New York. You can also check out the book here and the blog here. I LOVE IT!

Sorry, couldn’t resist. It really was a hoot, though. My fabulous niece Lauren (one of Pirate James’ lovely sisters) turned 5 and chose an owl themed party to celebrate with her family and friends on Saturday. And my clever sister-in-law Jo, fresh from the Pirate Party Extravaganza only two weeks ago, created another incredible party, with beautiful props and delicious food. Oh, and 1000 screaming little people. Ok, maybe not exactly 1000, but there were a LOT of excited girls and boys enjoying the party. Well, except for that little girl who started crying hysterically when her water balloon popped before the old school water balloon egg & spoon race even started. (Don’t worry, she recovered in time for the Musical Statues game.) Here are some pics from the festivities…

So there you have it – an owl party fit for one of my favourite people on the planet. The best storyteller I know, an incredible little lady with crazy curly hair, a brilliant sense of humour and fun, an amazing imagination, incredible energy and such a social butterfly.

And so my lovely nephew James turned 3 last week. Yesterday was his much anticipated Pirate Party – the invitation won me when the RSVP section asked Arrr you coming to my party? It was another extravaganza from the party mastermind, my amazing sister-in-law Jo. Countless hours were spent getting everything ready, with almost everything made by hand and with a whole lotta love. On a perfectly sunny Sydney day, there were plenty of cool pirate outfits, crazy pirate shenanigans and some delicious pirate food. A fitting way to celebrate the best little pirate I know – when they sang, “you are my sunshine”, I’m pretty sure they were talking about this guy. Anyways, here are some of the party pics, me hearties.

I am very lucky to live near a public park with a pretty good view of the fireworks, so it was very crowded yesterday on what was a beautifully sunny New Year’s Eve day in Sydney and a night that was perfect for fireworks. It’s always a great people-watching opportunity as the human traffic gathers on the grass – old people, young people; skinny people, fat people; people dressed in very little, people dressed strangely for arctic conditions; party poppers, party poopers; sober people, drunk people; super-organised-tent-and-catered-food people, super-chillaxed-chips-and-beach-towel people.

A guy was selling glow sticks, it was meant to be an alcohol-free zone and there were lots of families around – an excited buzz grew in the leadup to the 9pm family fireworks and then most of the people seemed to stick around for the midnight show. With the exception of a pretty scary incident with a group of swearing, drunk teenagers outside at 3.30am, which had me and the poor guy next door calling the police as a lunatic jumped the fence and started smashing things, it was a really nice night and a great way to see in the new year. Except for the lunatic bit, I guess. But I did get to watch that from the safety of my kitchen in my pyjamas, so it wasn’t too bad.

When I went for my run this morning, it felt like the city had a hangover. There were hardly any people out and about at 7am, but those that were on the running track were full of smiles – probably feeling smug that they too have run every day this year and have kept all of their 2013 resolutions. The park area was a different story – it looked like a cyclone had torn through a rubbish dump. Along with the usual types of rubbish, there were full champagne glasses, shoes, clothes, metal chairs, tents and of course party hats, poppers and horns that had seen a better day back in 2012.

So, here are some pics from my morning to mark the end of 2012 and the beginning of 2013 – thanks to those who will come this morning and make this area beautiful again, thanks to those who visited and enjoyed NYE in Sydney, thanks to the brilliant Foti Fireworks people who keep coming up with innovations that can make gunpowder magic. Happy new year – may 2013 bring lots of fun, laughter and good times with your families and friends.

Let’s all be sure to mark Wednesday 19 September on our calendars with a big X. Because in case you didn’t already know, 19 September is officially International Talk Like A Pirate Day. Uh huh. Apparently, this day began ten years ago, when John Baur and Mark Summers were playing racquetball in the US and started speaking to each other like pirates. No, they don’t know why, either. But they decided they were on to something and started to spread the word and encourage everyone to talk like a pirate on that day. It seems that it took off and was covered extensively by international media outlets, bloggers and scurvy dogs. Savvy? 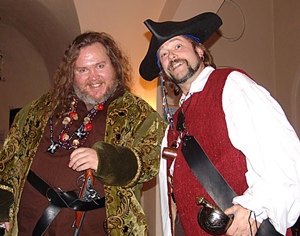 The boys called themselves Cap’n Slappy and Ol’ Chumbucket and started the Talk Like a Pirate website, which features everything you could possibly need to prepare for the big day – a shop, a translator, posters, songs, some craft activities and a link to a Pirate Name Generator. My pirate name is allegedly Dirty Anne Bonney, so I’m not sure how that works. 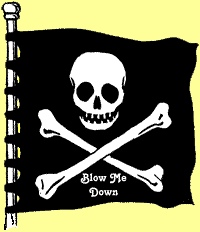 Whatever you’re doing on 19 September, be sure to punctuate your everyday speech with an ‘ahoy there’ or an ‘aye aye, Cap’n’ or maybe even a ‘shiver me timbers’. I’m giving you plenty of notice so that you can check out all of the info you need here before you plan your festivities. Arrrrrrrrrr!